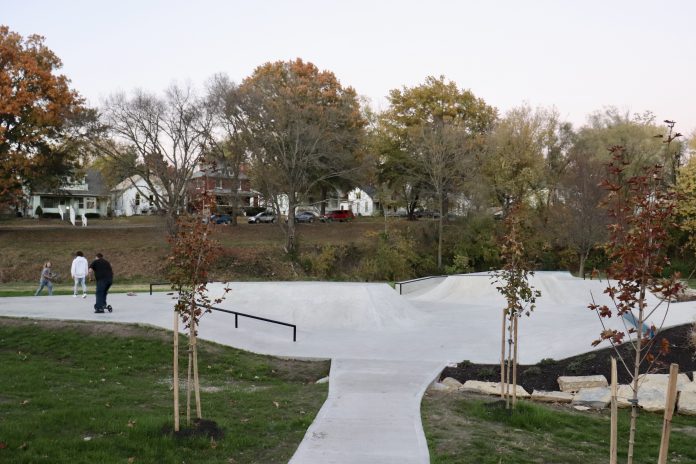 It’s official. The skate park in Atchison is up and running.

The new outdoor recreational area was funded by Skate High with Hope the Joshua Kinsman Foundation.

It’s a memorial for Joshua Kinsman who passed away in 2018 at the age of seventeen.  He had a love for skateboarding and had always wanted a skate park where he could go and hang out with friends.

His mother, Pamela Cline, said they came up with the idea of a park when they saw the donations from his funeral.

“Joshie loved to skateboard and always wanted to know why Atchison couldn’t have a great skatepark like other places we had visited over the years,” Cline said.

Cline decided to build the park “so people in Atchison could smile like I remember Joshie when he skated,” Cline said.

The skate park officially opened to the public in early October in its first phase, costing around $200,000.

Many community members came out to the grand opening to try out the new skate park, enjoy food, listen to music, and receive tips from skate professionals.

Cline said it was a very emotional day for her, as she was proud of all the work that had been done.

“Opening day was a great blessing.  Without God, this would not have happened, but we are also thankful to everyone that donated and helped,” Cline said.

According to the foundation’s official Facebook page, The Joshua Kinsman Foundation will continue to host fundraising events after the opening of the park in its first phase.

In November, they will host an online bingo game and in January or February there will be a super bowl square game.

They do these events in order “to keep people informed on where we are at with donations and the building of the park,” Cline said.

Jerica Carroll, an Atchison resident, was relaxing at the park Sunday night while her kids skated. She has been to the park a lot lately.

“The kids seem to like it,” Carroll mentioned. “Yesterday there were a lot of kids out here. And they are probably here most days on the weekend.”

Cline said that the message of the park is to let everyone know that “there is hope in this world still and that there’s always someone to listen and that kids and youth can enjoy life.”

Donations to the foundation can be made through PayPal, the Band of Atchison, or through the Atchison Area Community Foundation.