Home Sports Football Benedictine football continues an up and down season 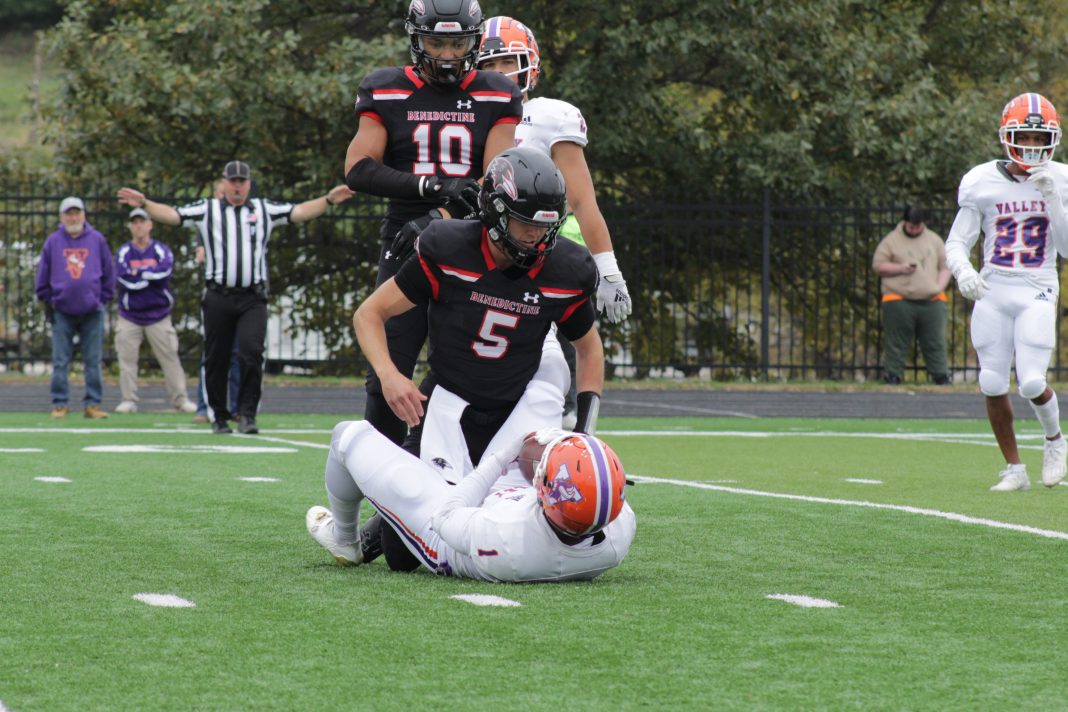 After some early season struggles, a three-game winning streak and beginning conference play, the Benedictine football team stands at 5-3 on the season.

This is Joel Osborn’s first season as the Benedictine head coach. His coaching staff has been very supportive and has helped him learn about the players quickly.

“I have really enjoyed my experience here. The coaching staff has been awesome, when I got here everyone was retained on our staff and that was a big positive because it allowed me to learn about the kids from the coaches because they had already had them,” Osborn said.

After winning the first game of the season by a wide margin, they immediately lost two games in a row. The Ravens then found their stride and went on a hot streak winning three straight games. The offense put up 60 or more points in all three of those contests.

The offense is led by Garrett Kettle, senior quarterback. Kettle has thrown for over 1,800 yards and has a total of 18 touchdowns this season, with 10 of those being rushing.

Kettle gives credit to the defense raking in turnovers and he believes it has been an overall all-around effort from everyone that created a spark for the three-game win streak.

“The game plan has been that everyone is 100 percent bought in and the defense has been getting a lot of turnovers the past three games which is helping us score sixty plus points because we are getting the ball at the forty-yard line every time so it’s short fields,” kettle said. “It’s been a lot of an all-around effort from these past couple games for sure.”

Tre Adger, senior wide receiver, is a huge impact player for the offense as well and a ‘go-to’ target for Kettle.as the leading receiver with over 550 total yards and nine touchdowns.

Adger explains the quarterback and wide receiver connection between himself and Kettle on and off the field creates the success.

“I think living together definitely helps just building that chemistry off the field and then when it comes to on the field, I think we both know at times that we will just give each other a look and I know the ball is going to come my way or he is looking my way at least,” Adger said.

The Ravens suffered their third loss against Central Methodist on the road in a close contest 30-24 but bounced back in their homecoming game defeating Missouri Valley 47-37. They now stand at 5-3 in the season.

Benedictine will face No. 5 Baker on the road at 1p.m. Saturday.

No. 2 Benedictine vs No. 7 Grand View University preview