The 30 year anniversary of the great mascot heist 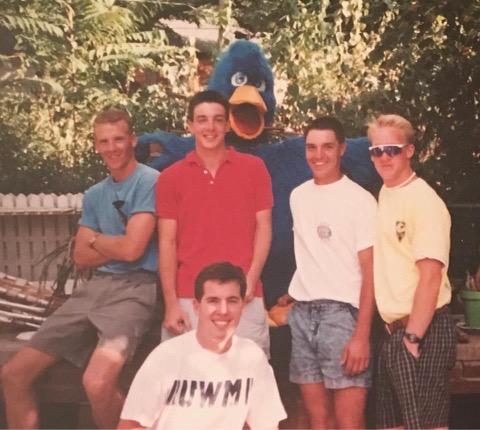 Phil Lombardi, Fr. Dan Andrews and three others began their Saturday morning at breakfast before their lives would change forever in October of 1990.

During breakfast, Andrews asked the group if they wanted to go to the BC soccer game against Rockhurst that day.

The group replied ‘yes’ and piled into Andrews’ 1973 Volkswagen van and set off to Kansas City, MO.

Before heading into the stadium, the group stopped to use the restroom inside the athletic offices. In a corner near the restrooms, a large object rested undisturbed.

“We walked by the [Rockhurst] mascot sitting in a blue heap in a corner,” Lombardi said.

The sophomores at Benedictine entered the bathroom and looked at each other.

“We go into the restroom and there is this silence. Then someone said, ‘We’re not leaving here without that are we?’ The rest of us said, ‘nope,’” Andrews said.

Lombardi exited the restroom and began to put the Rockhurst Hawk mascot on himself when the Rockhurst athletics secretary approached him.

“Oh, did you want to wear that for the game today?” she asked.

Lombardi could barely see through the Hawk’s head but saw the heads of his friends moving furiously up and down suggesting, ‘yes.’

The usual mascot wearer was away and could not participate in the soccer game, so Lombardi stepped in to help.

“The athletic secretary helped me get dressed up in this thing,” Lombardi said.

Lombardi was ready and dressed to be the Rockhurst mascot for their clash against the Ravens.

He was ushered onto the field by Andrews ready to participate in the biggest game of the season for Rockhurst. It was the Hawks Homecoming as the stands were packed to watch the two rival teams face each other.

“The first half of the game, Phil is the Rockhurst Hawk,” Andrews said. “He’s out there and going up to our players and talking trash.”

“I am heckling Benedictine Soccer players,” Lombardi said. “I would open the beak and show them who I was.”

The first half concluded as Lombardi had a decision to make.

“We are trying to find an exit strategy. But we can’t leave at halftime, it’s Homecoming,” Lombardi said. “I have to be on the field with their Homecoming Court. Otherwise, it looks too suspicious.”

Lombardi stayed on the field with the Homecoming Court as he hugged girls and gave handshakes to the men. He was a crowd favorite, so much so he received a new job opportunity. The Athletic Director of Rockhurst came to Lombardi with good news.

“He told me, ‘I don’t know who the last mascot was, but you’re much better than him. This is your job from now on,’” Lombardi said. “They offered me the job almost immediately.”

Five minutes inside the second half, Lombardi and the group had to escape.

“I pulled my van around and pushed the sliding door open,” Andrews said.

Lombardi tried his best to escape quietly, but the old mascot was too restricting.

“This thing had big yellow floppy feet, there was no way to carefully walk away,” Lombardi said.

With the sliding door open and the van running, Lombardi made the ultimate getaway. 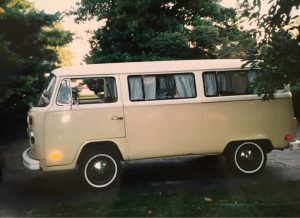 “Phil runs out with the big webbed feet and dives into the van,” Andrews said.

“I took the head off and threw it into the van before I dove into the van. I’ll never forget the women’s look who was in the car behind Fr. Dan,” Lombardi said. “The door slammed behind me and we were gone.”

“We make the big escape and off we go and head back to Atchison,” Andrews said.

Lombardi kept the Rockhurst mascot for four months utilizing it as a Halloween costume during its stint in Atchison.

In February, 1991, the Rockhurst basketball team came to Atchison to face the Ravens. Lombardi was ready with his secret weapon.

Lombardi suited up in the Hawk mascot at halftime of the game and ran into the gym.

“I clapped at the Rockhurst students, gave them a thumbs down and dove headfirst into our pit,” Lombardi said. “Our student section went crazy.”

The Benedictine student section mocked and jeered at the Rockhurst students while chanting, “Where’s your bird? We got your bird!”

After the game, Benedictine Administration told Lombardi it was time to give it back. There were zero questions asked and no disciplinary action taken.

“The plan was to keep it forever,” Lombardi said.

Lombardi, Andrews and the rest of the crew had just been a part of the best heist in school history.

“Everything just fell into place. You don’t hear stories through the ages of mascots being taken. When the opportunity comes, you almost have to,” Andrews said.

Not everything was lost though. Lombardi still has a keepsake from this momentous time as a student at BC.

“There was a tail that was pinned on, I ripped the tail off,” Lombardi said. “The tail is still in my possession.”