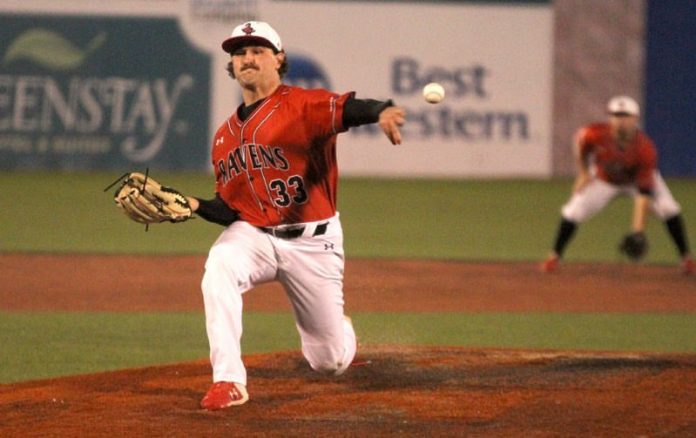 This is part of our ongoing series where we are highlighting senior athletes whose season was cut short due to the COVID-19 pandemic.

The Raven’s Baseball team played their last season of the year on March 13 against Mid-America Nazarene, as the NAIA cancelled all Spring sports on March 16.

Senior Ben Hankammer never imagined his senior season would end this way, but at the same, knew it had to be done for the health and safety of society.

“I think the guys that are in charge are making the right moves and we’re trusting them obviously,” Hankammer said. “It stinks for the senior athletes and everyone in general.”

Hankammer came to Benedictine as a Juco Baseball transfer in August 2018 as a junior. His two seasons with the Ravens saw him take the mound as a pitcher. In 2019, Hankammer appeared in 15 games for the Ravens with a ERA of 3.42 for second best on the team. During the  2020 season, he appeared only 8 times for the Ravens before their season was cut short.

Moving from being a student athlete to an online student has been quite the transition for Hankammer, especially in academics.

“There’s definitely more of an accountability factor to yourself,” Hankammer said. “There’s kind of the temptation to want to procrastinate and push things off for sure.”

Head Coach Eric Peterson has also been a help in the transition process, both as a coach and just someone to talk too.

“He’s reached out to us individually and was there for us in terms of any questions he’s had for us and really just someone to talk,” Hankammer said. “Peterson’s been great in that aspect of having a leader like that.”

Since being in communication with the team since the cancellation of the season, Peterson is making sure that the team is fine. But, everyone is still working through everything that’s has happened in such a short amount of time.

“I’m not sure reality has completely settled in yet since we’ve pretty much been isolated,” Hankammer said. “I think a lot of them are okay and at peace with it.”

Even though the NAIA gave all Spring sport athletes an extra year of eligibility, all the seniors baseball players are graduating and moving on except for a few who may stay to finish their career for the major leagues.

“Michael Slaten, Daryl Myers, and potentially Mike Kruze are all considering coming back,” Peterson said. “Daryl and Michael had a chance to be drafted this year in the first-year player draft.”

Regardless of where the seniors are at, Peterson knows they will get through this tough time with the toughness and resilience, which are some key things he will remember about this group of seniors.

“I came in two years ago and we had to recruit a lot of these kids back to campus cause a lot of them we’re leaving,” Peterson said. “A lot of them stayed. I owe a lot to them.”

Hankammer also praised the team and the seniors, in particular, for the experience he has had both on and off the field during college.

“The time that it’s been here has been valuable,” Hankammer said. “Some of the most special moments are just being there with your buddies and the bus trips and competing with the guys.”

He also acknowledged Benedictine as being so special for its value and commitment in faith, community, and scholarship. He would not trade the world for his time at the college, Hankammer said.

Peterson said that he cannot wait to see these seniors at commencement and wish them well as they graduate from Benedictine. Hankammer will graduate this Spring with a degree in finance and plans to work for TD Ameritrade in St. Louis, Missouri beginning this Summer.