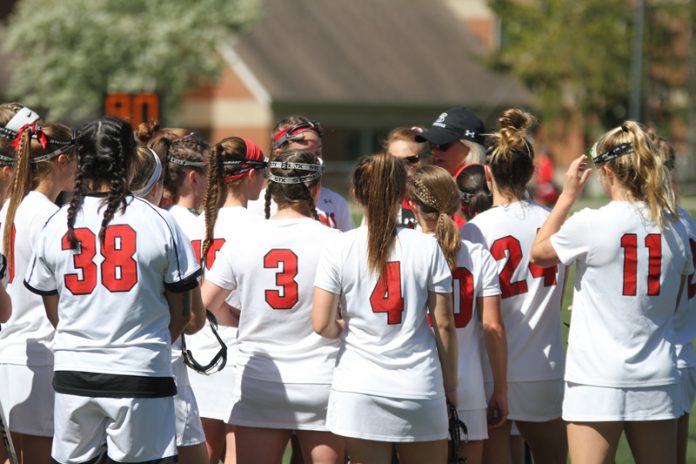 Varsity sports have been on the campus of Benedictine for many years, such as the men’s basketball team which is celebrating their 100th season this year. The women’s lacrosse team is different.

This Spring, the women’s lacrosse team have entered their fifth year of existing as a varsity sport. The transformation from a club sport to a powerhouse program in five years was a process for Ravens Head Coach Amanda Magee.

“The opportunity to start a program was interesting to me,” Magee said. “ I knew it was going to be a challenge, but I wanted that.”

In 2010, Magee graduated from Roger Williams University in Bristol, Rhode Island, where she would begin her coaching career shortly after graduation. Magee became an assistant coach for Salve Regina University learning from head coach Emily Kiablick. Kiablick showed Magee the traits, values and standards that are needed for young women to succeed on and off the lacrosse field.

Magee was ready to find a new home and begin her own head coaching career in 2015. During her interview at Benedictine, she encountered something new.

“I remember walking around on campus with Charlie [Gartenmayer] and President Stephen Minnis. They knew all the kids by their first names and I’ve never seen anything like that before,” Magee said.

Magee was hired shortly after her interview in February 2015, becoming the first head coach for women’s lacrosse in school history.

Women’s lacrosse at Benedictine did have some appreciation before Magee was hired. There was a club team that competed, but it was without the leadership of a coach.

Magee’s first order of business was to introduce herself to the club team members.

“I wanted to meet all the girls on the club team and gauge their interest,” Magee said. “Do you want to be a part of this when it goes varsity?”

Tara Lobb and Emily Kippes jumped at the idea to be with Magee.

“Tara and Emily were my go-tos immediately. They said, ‘We want to be a part of this first ever team,’” Magee said. “They helped me a lot.”

Others took a while to warm up to the idea of being a varsity athlete.

Clare Hansen, current graduate assistant for the Ravens, was a part of the club team during her freshman year.

“The juniors were like, ‘Oh, we don’t want to play. We didn’t sign up to be collegiate athletes,’” Hansen said. “But, every time they [juniors] went into her office, they said, ‘Oh well, we can’t not play.’ It’s because she [Magee] had such a good rapport with them and basically convinced them every time [to play].”

Magee was able to convince the majority of the club team to join her varsity team the following year. The next job for her to do was to recruit an area of the country she had never been to prior to her interview for the job.

“Bringing in recruits was my number one job,” Magee said.

The inaugural season of Benedictine women’s lacrosse was ready with a full roster and coach to take on the 2016 season.

“It was nice to have a coach, like a legitimate coach,” Hansen said. “It gave us permission to take it seriously.”

Practices were filled with drills and fitness tests to keep the women’s stick skills sharp while having their endurance and speed tested. There were tough days for the young program and that is when Magee looked to her mentor, Kiablick.

“I’m losing my mind at practice. We did one drill for an hour and a half because we couldn’t catch the ball. What do I do? Do I stop practice or do you continue to do it until we get it right? She [Kiablick] was a huge help for me,” Magee said. “I called her a lot during those first few years.”

The Ravens finished 2016 as the KCAC Champions with a record of 9-5.

“When we won the conference, that was a miracle,” Magee said. “These girls bought in immediately.”

Magee was back on the recruiting trail looking for prospects to fill the 2017 roster.

“[I was] looking for ladies who are mission fit for the school and the program,” Magee said. “I’m not worried about making you a really good lacrosse player, I am looking at intangibles that I can’t coach. Are you a hard worker? Are you going to love your teammates? That stuff is more important than your talent.”

Kacey Moore was one of the ladies that Magee wanted on her team. Moore has relied on her underdog mentality throughout her career. A player that was often overlooked during her high school days in Mill Creek, Washington.

“I just really liked how it was new and I was being part of something new, rather than something that had been around long,” Moore said.

Moore has become one of the most vital players for Magee and her staff. She has accounted for 126 goals and 56 assists during her three season for the Ravens. Moore’s skillset on the field is impressive, but the way she holds herself to such a high standard as a member of Benedictine is equally impressive.

“When I represent Benedictine in lacrosse, I want to be resilient,” Moore said. “Be tough, have an amazing work ethic and be a good person. Those are the things I want to be when I graduate.”

In 2019, Moore was recognized for her success on the field by being named second team All-American. Coach Magee was credited as the NAIA Coach of the Year as the Ravens made it all the way to the national championship before falling to Savannah College of Arts and Design 18-12. SCAD has ended the Ravens season in the NAIA tournament three out of the past four seasons.

Moore’s main goal is to seek revenge on SCAD and earn Benedictine a NAIA National Championship, but Moore remembers the roots of the program.

“I want to win so bad that if I don’t win, I’m going to be like, I didn’t get what I wanted. But then I’m going to remember where we started my freshman year to not go to Nationals because then we were not very good,” Moore said.

The Ravens are hungry for a National Championship, but they often do not forget what makes their team so true and authentic. This team is made up of core values and morals that define the greatness of the team.

Two components create the DNA of this team. The women on this team from top to bottom have created an atmosphere full of humility.

“In the beginning we were just super humble. We didn’t expect much, but we wanted to be good,” Hansen said. “We just enjoyed playing, enjoyed being around each other.”

“No one is cocky. Everyone is super humble and genuine,” Moore said. “We love it because we are having fun.”

The second component is respect. No matter your background or your talent, this team will give you the respect that you deserve. This is what creates such a positive environment for the Ravens.

“The girls on our team are themselves. They are all themselves,” Magee said. “They genuinely have love and respect for each other. The respect comes from how hard they work and how hard they are working for the same goal.”

“[Another aspect is] The respect we have for one another and how much we love each other,” Moore said. “We’re going to be hanging out all the time. So we all know each other super well and we kind of know each other’s different types of tendencies.”

Coach Magee started a program five years ago from nothing, but a handful of club level lacrosse players. Today, the Benedictine Women’s Lacrosse team has followed her philosophies of core values and morals to create a winning culture that will hopefully end with the raising of a national championship trophy and banner soon.

On March 16, the NAIA announced the cancellation of all athletic competitions due to the COVID-19 epidemic. The women’s lacrosse team finished their 2020 campaign with a 4-2 record.