Over 200 students and guests attended the Spiritual Gift Conference on Feb. 21-23 at Benedictine College. Before leaving the attendees were challenged to actively use what they learned to apply to their lives and others as well.

Sophomore Shane Kliethermes left the conference with the desire to be bolder in his faith and be more open to engage with others about his faith and just be all in.

“I can’t just have one foot out in the ocean and one foot on the shore,” Kliethermes said. “I need to fully immerse myself in the spirit and use my gifts every day.”

Living with the Holy Spirit everyday was one of the focuses of the conference. Julie Foley, mother of sophomore Mckenna Foley, gave a talk about living in the spirit and how it’s not something that needs to be forced, but is something Catholics can thrive in living.

Senior Sophie Holm saw the conference as not only about growing the spiritual gifts, but also experiencing the love of the Lord and sharing that love with others.

“I just want to love people with the love of Christ,” Holm said. “I just want to embrace more and share more with everyone that I come into contact with.”

Kliethermes, who was a part of the healing and prophetic prayer teams denounced the lie that the Lord does not want to heal people.

“The Lord fully desires to heal and that is something that we need to fully take in and understand in our hearts,” Kliethermes said. “The Lord loves us and he desires to more deeply bring us into relationship with Him.”

He also went into the conference believing that many were going to be healed and witness God’s love, which he saw happen, especially with a student he had never met.

“I got a [prophetic] word for her about ‘running’ and she said it settled in so well,” Kliethermes said. “It’s really cool to see how the spirit works in ways that you never expect.”

Holm was part of the prayer teams and witnessed a healing of a man’s broken leg, which had been hurt over a month ago, walking by the end.

“It was prayed over and he took off his boot and he was healed,” Holm said. “He was healed, but through that healing he came to know the Father more deeply.”

Both the students reassured that when healings and prophecies happen, it’s all coming from God and the interaction through the Holy Spirit. It’s Christ that is causing the miracles to happen and not just normal humans like Kliethermes or Holm.

“The point of the gifts isn’t to show off,” Holm said. “Everything is for the glory of God and to know of His love and to know Him in a deeper and more intimate way.”

In the end, this conference was not only meant to learn and grow in the spiritual gifts, but ultimately to be convicted to go out and spread the word.

“I want everyone who experienced that conference to go out with boldness and to spread and evangelize and talk about the Lord that He’s able to work miracles through us,” Kliethermes said. “We need to be bold and live in the spirit.” 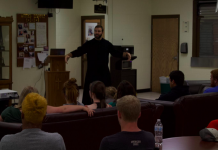 Additional Mass Times Offered at the Abbey Due to COVID-19

Fleur Wesselink, On Track to Set A New Record in Another...