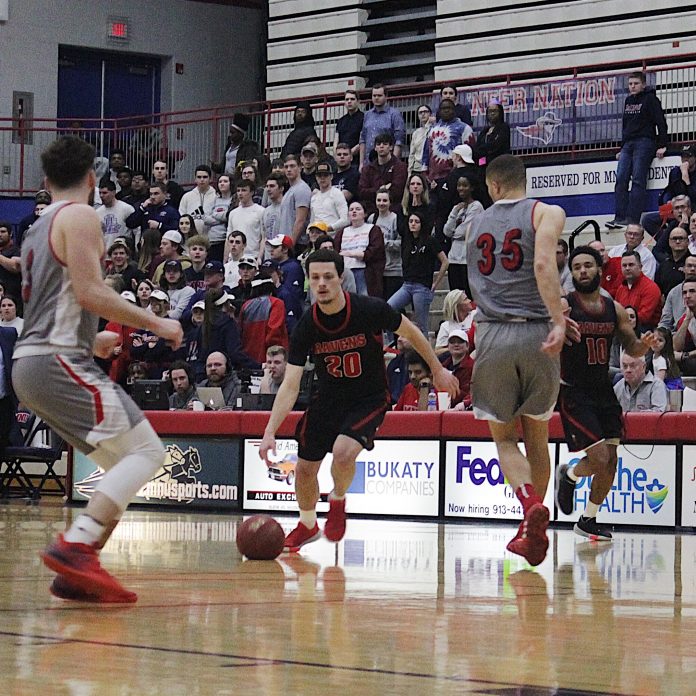 The 2019-2020 Benedictine basketball season has concluded with many highs and lows. The Ravens finished with a record 17-14 while ending the season in an overtime loss to Mid-America Nazarene in the Heart Quarterfinals. Here are some of the biggest events that transpired over the course of the season.

Game of the Season: Benedictine vs Clarke

The two contests between Clarke were by far the most entertaining on the whole season. Sadly, neither ended in a Raven victory, but you still have to marvel at the quality of basketball by both sides.

First, the Ravens and Pride squared off on Dec. 14 in Atchison. The Pride dominated the Ravens while racing out to a 20 point lead in the first half, but the Ravens battled back in the second half where the Ravens would tie Clarke twice.

Raven forward Colby Nickels had the opportunity to take the lead on a pair of free throws with 8 seconds remaining, but missed both. Clarke forward Keith Johnson drilled a three at the buzzer for the victory to give Clarke the 74-71 win.

Nickels finished with a double-double, 10 points and 10 rebounds. Matt Austin led the Ravens in scoring with 15 points while Nysir Scott scored 11 off the bench.

The resilience in battling all the way back from a 20 point deficit for the chance to win made this an entertaining game. But, Clarke’s last second shot made this game one of the best all season. Round two later in the year would give us an even better game.

BC matched-up against the Pride in Dubuque, Iowa on Feb. 15. The Ravens and Pride had the most competitive game we were able to witness all season. Benedictine and Clarke finished the game with 12 ties and 19 lead changes. Clarke had the largest lead of the whole game with 9 points which came late in the second overtime.

Jaiden Bristol finished with his second highest point total for the season with 23 points. He was the main catalyst on the day which saw him collect 9 rebounds and 3 assists. Clarke was able to knock down more free throws in the second overtime which led them to defeat BC 80-74 in 2OT.

Play of the Season: Bristol vs Missouri Valley

There were many great plays for the Ravens this season, but Bristol’s three pointer against Missouri Valley proved to be the play of the season, in my opinion.

The Ravens and Vikings faced each other on Nov. 26. Both teams were tied at 68 in the final two minutes of the game. The Ravens received an offensive rebound where Jayden Temme passed off an open three for a more open shot by Bristol.

He buried the triple to give the Ravens the lead. BC would win the game thanks in part to the late three pointer, 75-70. This shot was Bristol’s lone points of the entire game. His clutchness earned him the play of the season which extended the Raven’s win streak to three games at the time.

Newcomer of the Year: Matt Austin

Austin joined Benedictine after his junior college stint with Metropolitan Community College in Kansas City, Missouri. The departure of Thomas O’Connor due to graduation led an open spot in the starting rotation for a scoring shooting guard to fill.

Austin led the team in scoring 12.9 ppg while shooting 40% from the field. In the same game as Bristol’s play of the season, Austin scored the most points by a Raven all season. He finished with 30 points on 6-12 shooting from three point range.

He showed his efficiency against Culver-Stockton on Feb. 1 when he finished with 21 points to lead the team to a 69-51 victory. Austin shot 7-10 from the field while drilling 5-8 from deep. Austin was an automatic bucket for the Ravens on any given night, just give him a high ball screen and let the shooting guard do the rest of the work.

The biggest question mark for the 2019-2020 season was the center position. Zero players returned to the lineup that started for the Ravens in the five spot. Eric Krus would be sidelined for the first half of the season so new players had to step up.

Sophomore Tyson Cathy stepped right in and became a regular starter for Benedictine. Cathy started 29 out of the 30 games while averaging over 7 ppg. He also collected 5.5 rpg and led the team in blocks.

Cathy’s best game came on the road against Central Methodist on Jan. 13. He scored 15 points on 6-10 shooting while adding 9 rebounds and a block.

Cathy’s footwork and positioning on the lower block along with his efficiency helped balance the team that is full of three point threats. As the season continued, Cathy became extremely consistent in his role as the starting big man. Cathy’s right handed hook or his up-and-under play was a thing of beauty to watch on a nightly basis.

Story of the Season: The Return of Eric Krus & Christian Noskey vs Graceland

I could not pick between these two young men so I decided to include both for the story of the season.

Sophomore Eric Krus returned to the Ravens lineup against Graceland on Jan. 4 after sustaining a torn ACL on the final game of the season in the 2019 NAIA national tournament. Krus was the 2019 Heart Freshman of the Year while leading the Ravens to an unforgettable season.

He stepped back onto the court after the horrendous injury and began right where we left off with a three point swish. Krus would not start a game this season, but was a major lift off of the bench for the team as he averaged 8 ppg. The forward brought a great offensive flair that was much needed especially down the stretch of the season.

Christian Noskey’s journey from his cancer battle to the Ravens bench is remarkable and an inspiring journey for all to know. Noskey’s first game on the court in a Benedictine uniform against Graceland proved the end of his fight against testicular cancer. This was a momentous event for everyone close to Noskey.

Everyone on the team was shooting lights out from Austin to Jocoa Kerscen who made a ridiculous deep three towards the end of the game.

Benedictine’s offense was free flowing with great off-ball movement which led to 21 assists on the night. The Ravens would eclipse the century mark for the only time this season. The final score ended with the Ravens defeating Mount Mercy 101-65.

Honorable Mention: First half against Evangel

Low of the Season: Injuries

The resilience of this team to keep fighting and continue through the hardships of injuries is a testament to the strength of this team’s will. It would have been easy to give up when the starting lineup changed for the 6th different time, but the Ravens stuck with it.

The best team performance for the Ravens came on Jan. 25 when they took on #3 team in the country, William Penn. The Statesmen had lost only one game before facing Benedictine, but they would soon be dragging their tails out of Atchison on their way back home.

The game was all Benedictine from the opening tip. William Penn never led and was never able to tie the game during the contest between the two Heart opponents.

Benedictine led as much as 20 points during the course of the game. William Penn’s 15 turnovers proved to be the difference as the Ravens scored 17 points off of takeaways.

The collective team play and spirit propelled the Ravens to upset William Penn 97-91 in a packed Ralph Nolan Gymnasium.

The Ravens finished the 2019-2020 season with a 17-14 record. I am grateful for the opportunity to cover this team throughout the season. Thank you to all of you who read my previews before each game, I really appreciate it. I cannot wait to see what is in store for the 2020-2021 Benedictine basketball season. Until then, go Ravens!