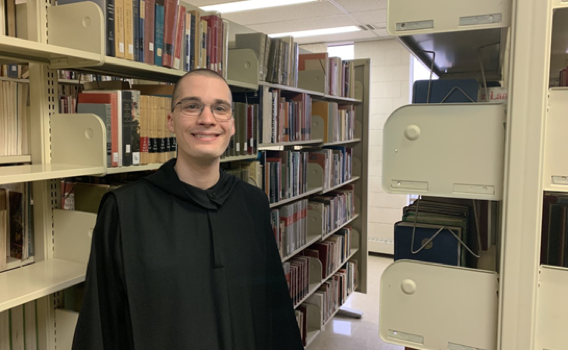 Brother Florian, formerly Peter Rumpza, is one of the newest monks at St. Benedict’s Abbey, and believes that he has found his earthly home.  A cradle Catholic, Brother Florian has embraced life at the Abbey instead of his former career studying computer science at the University of Minnesota.

“After my first year of college, I kind of felt like a depression in my life.  Something felt empty, and I was trying to find what would make me happy,” Brother Florian said.

Taking a break from college, Brother Florian spent time searching and praying for God to show him his path.

“He didn’t give me an immediate answer, you know, ‘I want you to be a monk’!  But he was showing me things along the way,” Brother Florian said.

But he did eventually find an answer while scrolling through Facebook.

“Eventually, I was scrolling through my Facebook feed outside the adoration chapel, which is kind of a silly thing to do before you go to pray.  But I saw a picture of a monk on my news feed.  I don’t know why it was there, but I felt something in my heart yearn for that, say ‘I want that.’” Brother Florian said.

Thanks to his brother John, a graduate from Benedictine College, Brother Florian decided to visit St. Benedict’s Abbey on retreat.

“When I visited the Abbey, one of the things that attracted me was the fraternal charity between the monks.  It made me realize that they were loving with a love that’s beyond human love.  A manifestation of Christ’s love.” Brother Florian said.

Brother Florian is now in his simple vows, the three-year long period before his solemn final vows.  For Brother Florian, that time is spent in discernment.

“Everyone’s journey is different.  But you have to do three years minimum so you know God’s will,” Brother Florian said.

Click the link to read more about Brother Florian’s call when he first became a postulate at St. Benedict’s Abbey.

Additional Mass Times Offered at the Abbey Due to COVID-19

The distribution of ashes during a pandemic

The Dragons and the Weather