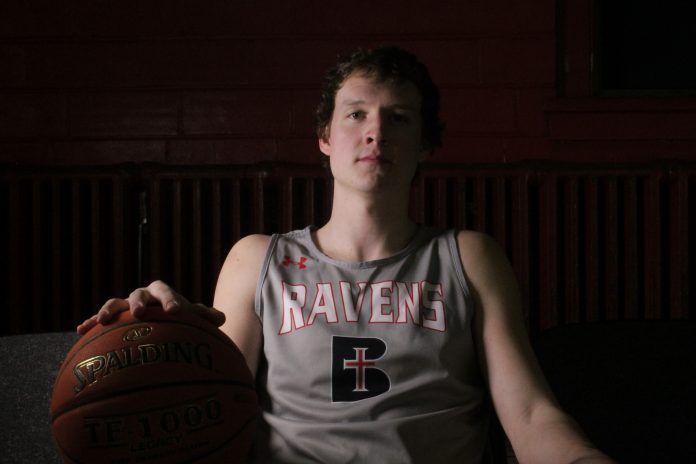 Healthy and competitive was the mantra of Christian Noskey. The Benedictine basketball player was preparing for the new season when something felt off. The sophomore from Tampa, Florida would soon trade textbooks for surgeries and cafe food for chemotherapy. It was an experience that would forever change his outlook on life.

“There’s not much in life that matters aside from your relationship with Christ, your family and friends,” Noskey said.

In Sept. 2018, Noskey felt a little off and decided to see the Benedictine training staff. They directed him to a local doctor for tests. Noskey’s proactiveness was pivotal in the early stages. Doctors told Noskey his lump was a benign tumor and it was pre-cancerous.

Head Coach Ryan Moody was among the first to realize the seriousness of Noskey’s situation.

“I had fear for Christian, how are we going to help him,” Moody said. “I went to doctor’s appointments with him, somebody needed to be there with him because his parents can’t keep getting on a plane.”

Later, Noskey would have another test where his Urologist believed it was a cyst and he would need it to be removed. He would undergo a surgery before Thanksgiving in 2018. His tests were sent to the Mayo Clinic where a harsh truth was found.

Noskey was diagnosed with testicular cancer. The cancer invaded the lymphatic system and was growing throughout the body.

Noskey decided to leave Benedictine and the basketball team to focus on his personal health.

“He was himself the whole time, he was going to fight this thing,” Moody said.

Once in Florida, Noskey started chemotherapy. It would continue for three months.

“Wednesday of my first week of chemo, we received my blood work back. There’s markers in your blood that only elevate in your body when you have tumors in your body,” Noskey said.

The indication of tumors elevated Noskey from one round of chemo to three rounds.

“Every day was different, it was a challenge,” Noskey said.

Christian’s big three of Christ, family and friends created a positive attitude during a bleak time. His Grandparents flew to Florida to visit with him while his friends from his hometown stayed involved in his fight. But, his relationship with Jesus Christ helped him the most during the darkest of days inside a hospital.

“I think it is underrated, your relationship with Christ. Most people don’t understand the power he has,” Noskey said.

Before leaving for Florida, Noskey was able to receive the Sacrament of Anointing of the Sick by Fr. Simon.

“It was a good start to a tough road ahead,” Noskey said.

On April 26, Noskey and his family received the best news in a long time.

“It was official, I was cancer free,” Noskey said.

Noskey and his mother celebrated with a beautiful tattoo. Noskey has the words, ‘I love you’, tattooed on his chest in his mother’s handwriting. While his mother has the same words in Noskey’s penmanship. A long, arduous journey finally reaching culmination with three simple words. ~I love you

Noskey has returned to Benedictine to continue his education. Chemo left an ugly mark on Noskey as he struggled to return to game shape. He worked hard with the coaches and training staff so he could return to full action with the team.

Noskey played for the first time in his Raven career on Jan. 4. against Graceland as he stepped onto the court in the final seconds.

Today, Noskey plays for the scout team during practice while seeing the floor only in the closing seconds of games, but his journey over the past year is one full of inspiration and hard work.