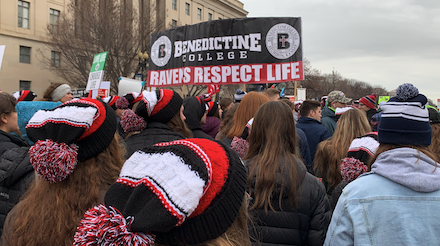 The 47th annual March for Life took place in downtown Washington D.C. on Friday, Jan. 24. Thousands marched for the lives of the unborn, and this year marks Benedictine’s 34 year going to the event.

Writer Julie Phillips for The Circuit, attended the event and created the video posted below. The video contains voiceovers from President Donald Trump.

Five buses drove over 260 students, arriving at their hotel Thursday evening, and began with the Kansas March for Life Mass on Friday morning.

Following Mass, the March for Life Rally was held near the Washington Monument. The theme for this year’s march was ‘Life Empowers: Pro-Life is Pro-Woman’.

This year also marks the 100 year anniversary of the 19th amendment, which was led by women suffragists. Jeanne Mancini, President of March for Life, said the suffragists gives the pro-life movement hope in the future in an article from marchforlife.org.

“It’s really good for our generation for our president to be there at the march,” Lara said. “He’s honestly the most pro-life president ever which is inspiring because it can inspire others to serve within the movement.”

The march immediately followed the rally, marching on Constitutional Ave. at 12th St. to the Supreme Court building, peacefully protesting the lives of those lost to abortion.

Benedictine College students finished the march by praying the rosary in front of the building for the end of abortions.

A print article by Nicholas Salamunovich including more information about the 2020 March for Life will be produced in the next edition of the Circuit’s newspaper.