Dr. Wolf speaks on the 1870 Lynching in Atchison 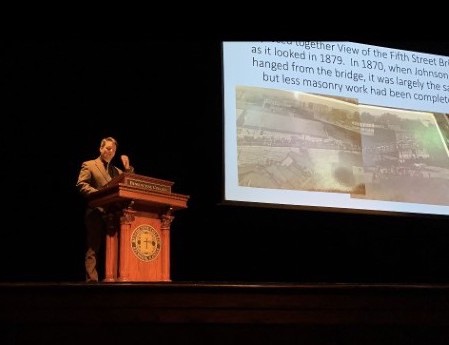 Wolf began his speech with a powerful message that set the tone for a heartbreakingly true story.

“Atchison has a strong past, but some dark truths,” Wolf said.

Wolf explained that the death of Molly in Jackson Park was not true, but a fabricated story to drum up interest in the Atchison community. The story of Molly is purely a ghost story.

Junior Katherine Starr was surprised to hear the story about Molly was false.

“It’s sad that that is the story that is being passed on [In Atchison] is false because they had to romanticize a story that wasn’t about George Johnson,” Starr said.

Wolf shared the timeline of how George Johnson was lynched to a full O’Malley-McAllister Auditorium crowd.

On Dec. 31, 1869, Johnson accidentally shoots Patrick Cox. The real motive to Johnson’s shooting was never uncovered, but is assumed it occurred due to Johnson being frightened or spooked. He fled the scene leaving Cox at the place of the shooting.

Two days later, Johnson turned himself into the Atchison Police force explaining what happened on that fateful night. Johnson was arrested and stayed in the jail for the next two days.

News was circulating around Atchison that Johnson, a black man, shot and killed Cox, a white man, but this was not true. Cox did not die from this gun shot wound. He would die of natural causes years later.

As the rumors spread, a lynch mob of around 50 people joined to storm the Atchison Jail on Jan. 4, 1870.

The mob over powered the one officer that was stationed that night to protect Johnson. Johnson was shot three times in the jail and was taken outside by the mob.

Johnson was dragged and beaten from the corner of Sixth and Santa Fe Street to Fourth and Commercial Street. Johnson would be shot 12 more times, miraculously Johnson was still alive until he was hung on the Fifth Street Bridge for all of Atchison to see.

Wolf shared his own thoughts on how the lynching could have been prevented. He said the addition of more officers in the jail would have been enough to deter the mob or they could have moved Johnson to an unknown location unknown to the Atchison public.

Wolf’s presentation is a part of his new book titled, “American Slavery, American Violence” which will be finished in three to five years.