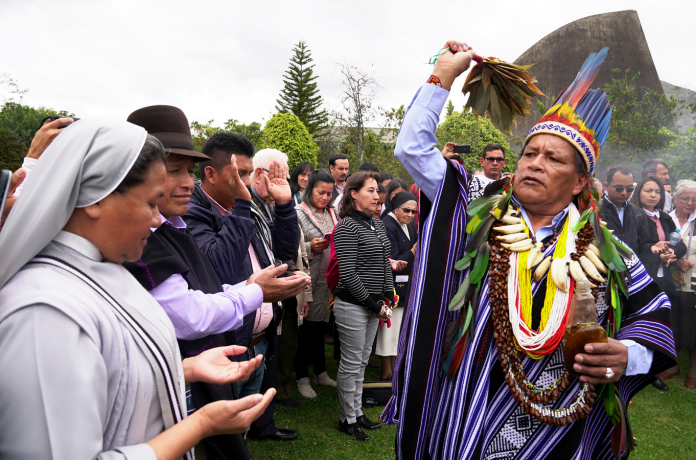 Those in the Amazonian Region have problems particularly with the lack of priests and missionary evangelization, female deacons and ministries, environmental issues, and pagan influences. Talks of female deacons has been part of it as well.

Due to the lack of priests, there has been a call for married deacons in the Amazon to be become priests, in hopes of converting more Amazonians to Catholicism. In the final document of the synod, the author stated that ‘some wished the topic would be addressed in a universal way’, possibly allowing any married deacon worldwide to become a priest.

However, in Canon Law 277.1, it discusses the reasoning for celibacy in the priesthood.

Senior Johnathan Jesik says still believes in the importance of the celibacy of the priesthood.

“The Roman Catholic Church, as it is now, personifies and exemplifies the priesthood of Christ in such a way that they exemplify the celibacy of Jesus Christ,” Jesik said.

Jesik mentioned that since the priest’s celibacy is under Ecclesiastical Law, he could respect further studies into married priests in the Roman rite by Pope Francis.

There has also been a lack of evangelization and pastoral work in the Amazon Synod due to the lack of priests, but also because of economics and infostructure.

Senior Sterling Jennings also said evangelization is nothing new in today’s age. He said Paganism, especially in the Amazon region, has been on the rise along with Atheism and Satanism.

“It’s very important to send missionaries where there are none or where the missionaries have become ineffective,” Jennings said. “All these things have been on the rise in the past twenty, thirty years, so there’s actually a number of priests who talk about America as a mission territory as well.”

Paganism was especially touched on with the Pachamama statue, a statue that is deemed to be idolatrous and a fertility goddess for the Amazon region. Cardinal Gerhard Muller warned against the rise of ‘old paganism’ and to be weary of it creeping in the Catholic church.

Jennings also said that since the statue is an idolatrous statue, the church would need to be re-consecrated.

“Per Canon Law [1210-1212 and 1238], the church Santa Maria Transpontina where that idol was placed and in St. Peters would have to be re-consecrated because idolatry in the church actually affects the whole mist of the church.”

Since the synod ended there has been little action, other than many statements from different sides of the Catholic spectrum, both for and against these topics in the synod.

“I think that it brought a lot of people who were unaware or generally don’t follow what happens in the church to a greater awareness of things that are happening in the church,” Jennings said.

Jennings followed the Synod closely and has continued to follow the aftereffects.

“I had priests give four different homilies probably from the time that it was conceived until it was over,” Jennings said.

Jennings commented he saw more negative results than positive, particularly because of the influx of liberal influence brought into the meetings.