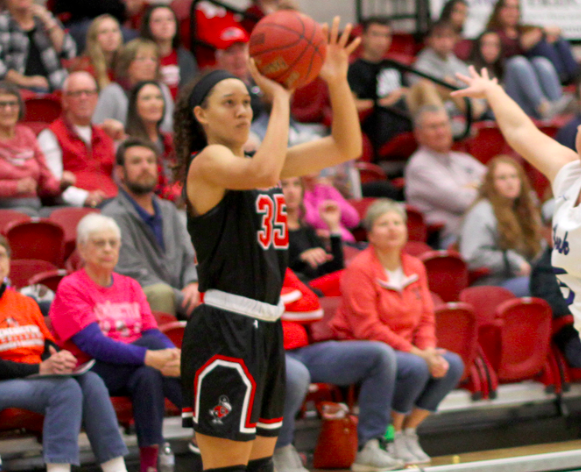 Kayla Staley was a notable player for both offense and defense against Baker.

The Ravens had a total of 50 rebounds, 19 more than Baker, who were previously 4-0 this season. Staley lead the team with 10 rebounds as well as Anna Sanjuan, just four behind her.

During the first quarter Grace Brzozowski contributed a block, a hard drive from the three-point line scoring two points, and a foul against her, all immediately after entering the game for Staley. Both Thomas and Rylee Neill contributed three-pointers, two of the four for the team. Just before the end of the quarter Staley was fouled with one second left, successfully shooting two free throws for the Ravens who led 18-11.

The second quarter had hard drives from Thomas and Natalie Smaron, including a push through Baker players from the three-point line to score. With just one minute left in the quarter the Ravens led by 10, but allowed Baker to score four points before halftime. Despite the last push from Baker, the Ravens led 29-23 going into the third.

A big third quarter for the Ravens was both positive and negative, as they struggled with fouls against Baker. By the end of the game, Thomas and Ali Brzozowski were just one short from fouling out of the game. However, the Ravens performed well offensively. They had a 13 point lead with 7:49 left in the quarter.

Aggressive plays from the Ravens, just two minutes left in the third quarter, started with Staley scoring two off a rebound. Brynn Maul followed with a three-pointer, and Sam Brennan snagged a steal with another three-pointer to lead by 15 going into the fourth.

Grace Brzozowski scored a majority of her points in the fourth quarter. She had a total of three rebounds, three free throws, and four two-pointers throughout the night.

With 5:23 left in the fourth and Benedictine ahead by 18, the Ravens held a consistent lead of at least 10 points the whole quarter. Abby Bird for Baker University fouled out just before the game ended.

The Ravens, now ranking 6-1 for the season, worked hard both offensively and defensively for a win against Baker University.