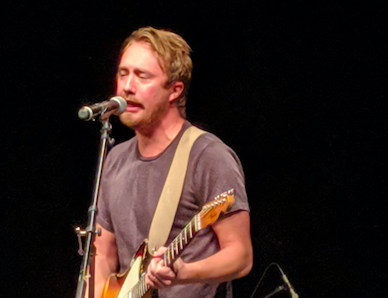 Tulsa based indie rock band Wilderado performed at Benedictine College on Sept. 28th in the O’Malley McAllister Auditorium. In an interview with Max Rainer, he tells about his life and participating in a touring music group.

This interview has been edited for clarity and conciseness.

Did you all meet in 2015, or is that when the band started? (Brendan Gainer)

Max Rainer: We all met in school and moved out to LA; we weren’t really doing anything but I had written some songs and decided we might as well record a bunch and see how it goes.

Usually people ask about musical inspirations, but are there any other artistic mediums such as films and photographers that inspired your work?

Max Rainer: The three of us were in Communications, like film and digital media, so films have a big impact on us. Justin [Wilderado’s drummer] is a graphic designer.

What is the creative process like for Wilderado? Do you usually write most songs and then show them to the band?

Max Rainer: I write most of the music, but everyone has a pretty big part. I write all the melodies and lyrics, but it’s a pretty collaborative experience. The band is definitely a heavy filter, if they’re not into it, we don’t play it.

Do you have any other hobbies than music to pass time on the road?

Max Rainer: We started playing Mario Kart on our phones actually! That’s what I did all today. (Laughs) I like to write a lot; we all tend to read a lot, and we listen to plenty of music. It’s a pretty symbiotic van experience.

What would the ideal venue be for you to perform in? Do you prefer small, basement shows or larger auditorium type venues?

Max Rainer: I think as soon as you choose one, it would all be pretty boring. It’s fun to play when every show is different. It really makes it exciting.

Rainer: We had a pretty big break. We took most of the summer since I had another kid. We were in the studio a lot, but we didn’t do too much touring this summer. [Tonight’s concert] is actually kind of a one-off. From here we head back to Tulsa then we get back out in a week, and that’ll be most of October.

So, you’re based out of Tulsa then, what’s the music scene like there?

Max Rainer: Killer. Best players in the world are there. People don’t know that, but you should do some history on Tulsa! It’s crazy who has come out of there. Tulsa has a rich late-60’s scene. Everyone was there; the Beatles were there a lot, Eric Clapton was there a lot. It was this hub of music.

How far of a drive from Tulsa to here is it?

Max Rainer: About five hours or so.

So, coming up to Atchison isn’t too bad of a trip then.

Max Rainer: No not at all, it’s going to be a lot of fun.

Lastly, if anyone who hasn’t heard of you before is coming to the show and ends up liking your music, what is the best way they can support you?

Max Rainer: Sharing the music. That’s how we’ve made all our fans, and how we’ll continue to make our fans. There’s nothing like word of mouth! Tell all your buddies, they trust you, it’s so much different than trying to get a blog’s attention.