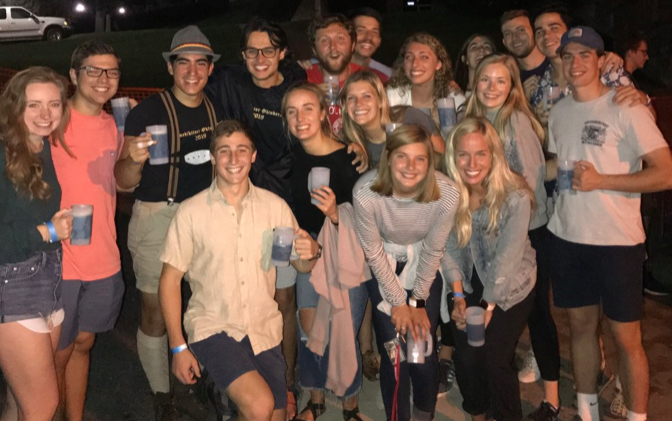 Started in Munich, Germany in 1810 by King Ludwig I, held a festival for his marriage giving it the original name ‘Oktoberfest‘ that occurred every year.

International Student, Luisa , is from Augsburg, a city in the Bavarian state of Germany. She has been to Oktoberfest in her town, filled with beer tents, food and celebrations.

“Everyone sings and dances and they wear the traditional and ” said. “There’s a parade with music and costumes, and they have a big opening ceremony where politicians and a lot of people just come.”

The tradition was brought to Benedictiine by Fr. Brendan Rolling in 2000.

According to Residence Director Sean Mulcahy, the Abbey and the Mount of St. Scholastica roots are traced backed to monasteries and schools in Bavaria as well.

“The monks founded the college and so it really just ties in our historical roots that we want to honor and celebrate every year,” Mulcahy said. “The particular Order of monks who came over to Atchison, Kansas came from Bavaria.”

As part of the opening ceremony, the mayor in Munich always taps and fills the first glass of beer from the barrels that are brought to the festival.

Here at Benedictine, the campus has always begun with the opening ceremony and a celebratory toast, just as the Germans.

“It’s successful at not only honoring that [our heritage but at bringing people together in a unique way,” Mulcahy said. “It’s hard to find another event on campus that pulls about 900 people a year and of those people, you have the students, of course, but also a number of the faculty, staff and their family members.”