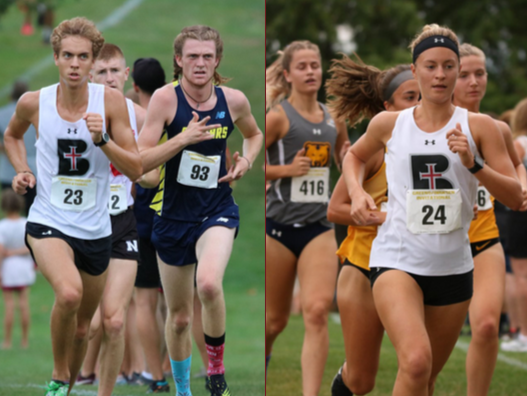 Melanie Cozzi, junior, and her brother, Casmir Cozzi, freshman, are actively involved in the women’s and men’s cross country teams at Benedictine College. The brother-sister duo display a strong bond with one another, each respecting the other’s strengths and potential.

“It feels like my worlds are colliding…in the best way possible,” said Melanie Cozzi. “In these past two years, my team has become my family, and now my actual family has become a part of it, which is super neat…Seeing Cas here at BC makes my heart happy.”

Melanie Cozzi attributes her preoccupation with running, at least in part, to her familial heritage.

“My mom ran when she was in high school,” Cozzi said. “So there was already a slight history of runners in the family.”

Though she enjoyed participating in numerous athletic activities during her high school years, Melanie Cozzi discovered she had a special knack for running. During her time at Benedictine thus far, she has especially revealed in the sense of community which her sport has formed around her and her teammates.

The Cozzis share a passion for running as well as for one another. The now-junior runner anticipated Casmir’s choice of college and cherishes getting to see him more often. “I knew this would be a great place for him like it has been for me,” Melanie Cozzi said. “Of course, he ultimately knew what would be best for him, but sometimes a sister just knows.”

Joining the cross country men’s team at Benedictine was only natural for Casmir Cozzi, who has taken delight in running since he joined a track team in 4th grade.

Casmir Cozzi also noted that he has appreciated the proximity between his athletic activities and those of his sister in building up their relationship. “It…gives me the opportunity to see her almost every day,” said Casmir Cozzi, “which is awesome because she’s an amazing person.”

For the Cozzis, running has become a tradition, and it is one which has built up muscle as well as relationships. While Melanie looks forward to an upcoming cross country conference in November, both siblings anticipate seeing more of each other in the midst of pursuing their passion.