Less Parking and More Fines in the REC Lot 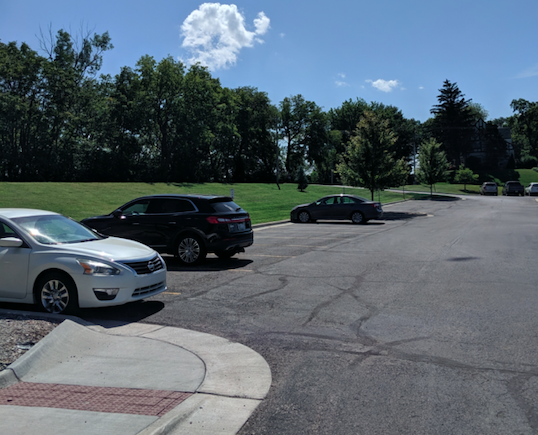 Finding parking around College‘s campus has become increasingly difficult during class times, in part due to the loss of roughly 20 student spots in the Murphy Recreation Center parking lot.

All parking spots of the eastern row of the lot are now designated for faculty parking, raising the question why these spots were taken from students to begin.

In the spring semester of 2019, these spots were temporarily designated for faculty members only, however they were returned to students after consideration for the high amount of traffic visiting the lot every day.

“In order to accommodate the staff not being able to park outside the sidewalk of the Abbey, [the school] had to give that row back in the Rec [to faculty].” St. Louis said.

This has left many students with few options other than walking from Washington Street, much further away from classes than the on-campus lot.

“Not only do I have to drive to school, but the fact that I have to spend another 10 mins to find a spot is ridiculous. I have to park on Washington Street just to make it to class.” Svoboda said.

The parking situation affects many off-campus students where driving is the only viable option.

“The increase in fines was implemented to discourage people from continually breaking the parking rules,” St. Louis explained, “It’s there so people don’t park in the wrong places as often.”

To read about the Muddy River Festival in Atchison, KS click here.

Although this works in theory, it also leads to students being ticketed for having no other place to park. This creates a scenario where a student must either be late to (or miss) a class.

Efforts are being made by Matt Fassero, Director of Operations, to remedy the parking congestion.

“SGA made a proposal last year to modify the parking policy based on which residence hall a student lives in. Those changes were accepted, which created the two zones for student parking. The campus still maintains a surplus of parking available to students, faculty, and staff,” Fassero said.

The decision to create separate parking passes for students living in different dorms or off-campus has helped to divert some students from parking in high traffic areas like the Murphy Recreational Center lot.