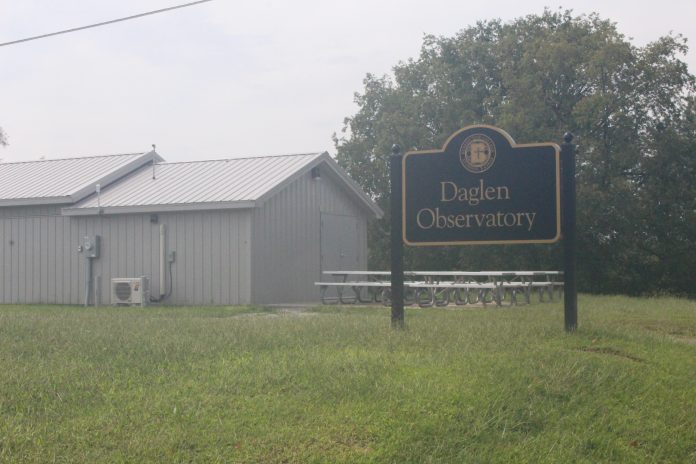 Students have been able to view the beautiful starry sky in Daglen Observatory for about two years since it became operational in 2017. Now the students can go beyond just observing the stars and onto collecting scientific data.

Daglen Observatory has begun to take scientific data on a particular star in the sky, and the students are the ones collecting it.

This data is to be collected by a spectrograph. A spectrograph takes light from a star and separates it by wavelength, causing different colored light to go in different directions, much like shining light through a prism.

Dr. Ryan Maderak, director of the astronomy department, is excited to begin collecting data with the observatory.

“After the end of the spring semester, I really concentrated my efforts on getting that spectrograph set up, and so we were finally able to take real science data in July,” Maderak said.

The spectrograph came from a generous donor name Joe Daglen, who is also responsible for the funding of the observatory and holds its namesake.

“Back in December of this past year and said ‘I want to give you the money so you can get a spectrograph,” Maderak said.

The star that is being tracked in called AC Herculis a type of variable star, which is a star where its brightness changes.

The ability to gather data on the variable star is incredibly profound. In the past, spectrographs for smaller telescopes have not been able to produce high-quality images.

This star also holds some value among Maderak and why he chose it.

“My predecessor Dr. Scott Baird, professor emeritus who taught me here, he actually wrote his dissertation on the star that we have been observing,” Maderak said. “It’s, in part, because of his interest in this particular type of variable star that I got interested in it years ago. ”

The spectrograph can provide the students with hands-on experience that is available right near their college. Josh Heinerikson, an Astronomy and Physics Major, has been collecting the data since the beginning in July.

“My job at the observatory is to take the calibration shots beforehand, and then take the actual data exposures,” Heinerikson explained.

Heinerikson is grateful for the opportunity to gather the data on the star and how it helps both him and the students.

“It gives the students a better understanding of what is happening out there, in the solar theater,” Heinerikson states, “It’s definitely helped me to understand solar mechanics better.”

Maderak’s biggest hope with this star is that his students can have publishable data attributed to them.

“We are hoping to understand how this kind of variable star works, that will be a genuine contribution to the field of astronomy and the biggest accomplishment is that our students get that experience,” Maderak said.