Home Sports Fleur Wesselink, On Track to Set A New Record in Another Country 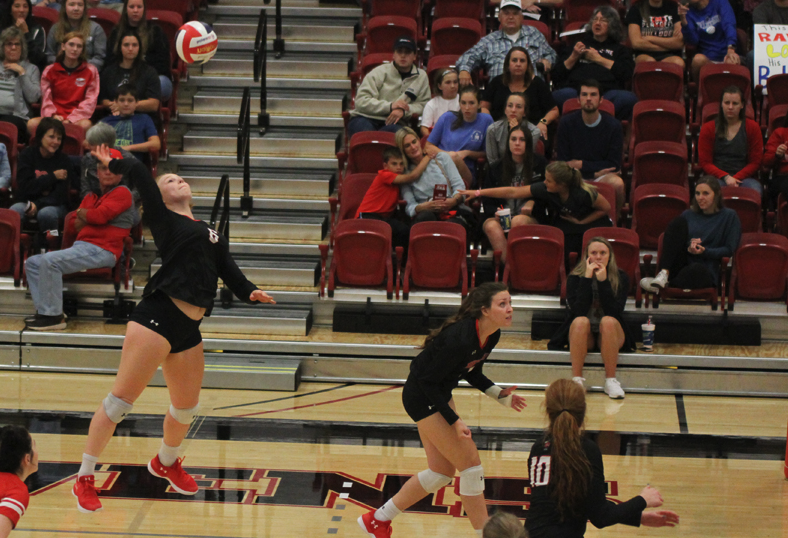 Fleur Wesselink, , is on course to set a new record for the Benedictine volleyball team before the end of the 2019-2020 season, in a different country from home.

Wesselink returns to Apeldoorn, Netherlands (4,531 miles from Benedictine College) during Christmas and summer to visit her family, which is considered lucky for most international students.

Currently with 1,083 kills for the season, Wesselink ranks 30th in Division 1 kills per game. Individually, she hopes to be named all-American. Additionally, as one of the captains, along with Jade Rasmussen, senior, she plans to lead her team to nationals.

“It will be a challenge but definitely a challenge we accepted as a team,” Wesselink said.

Since age 16, Wesselink considered playing volleyball in America after hearing about a teammates positive experience. When applying for colleges, she applied to only schools in the United States.

“When I would say I am going to study in America, first people did not take it serious as it was such a huge step that some people can only dream of,” Wesselink said.

With assistance from a previous teammate and the Made Scholarship program, which provides “recruiting services to student athletes who want to play sports while studying in the United States” (madescholarships.com), she was able to join the team in 2016.

The seniors and teammates have made a tremendous impact on Wesselink’s experience in the U.S.

“Every year I become closer with them. We share a lot of time on the court but I have a million memories off the court with my teammates that I will keep forever,” Wesselink said.

She especially enjoys the difference in cultural change from the Benedictine community.

“Coming in contact with people from all around the world and call them friends is amazing. If I would have stayed in the Netherlands my best friends would probably not have been from America, Brazil and Turkey like they are now,” Wesselink said.

Including recognition of first-team conference and honorable mention her junior and senior year, she also reached an individual high of 434 kills and the title, “attacker of the year”, in the 2017 NAIA conference.

Optimistic towards the situation, Wesselink continues to work hard for her individual and team goals across the country.

The lasting values of libraries