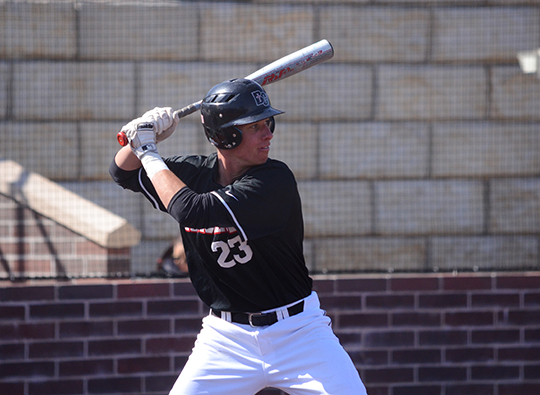 When you go to the Benedictine College baseball field you might notice two things. First, Eric Peterson has taken over as head coach, replacing Anthony Everman, and that most of the teams’ practice gear have the letters TLC on the back.

The letters stand for Trust, Love and Communication. This means something different to different people. For Peterson, it is a two-way matter.

“Once we’ve given it we can expect it, but we have to show them trust and caring first,” Peterson said.

For player Daryl Myers, it is much more directly related to game time.

“To me TLC means having faith in every teammate on the team to fill their role and everyone does their job to help the team improve as a whole,” Myers said.

This outlook from Myers was an intentional effect from Peterson. He came in to the year with the intention to put in the work to establish a culture of Trust, Love and Communication within his players. Though he anticipated that it will be difficult and take some time, he was surprised to find that they quickly responded to it.

“Now that it has been established we have to shift our focus to protecting the culture,” Peterson said.

Part of establishing this culture was making sure that the players understand that he has an open door policy at all times.

“Coach Peterson is there for each and every player and will do everything he can for us both on and off the field,” Myers said.

According to Peterson he found it important to especially give trust to his players and then earn it back from them, just as they have to earn everything that is not TLC. This shines through in his coaching.