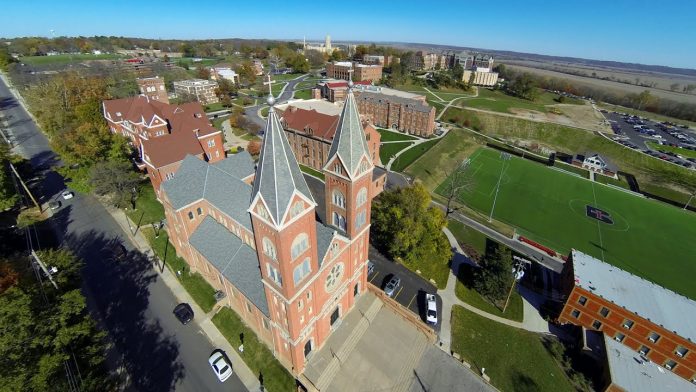 A pair of roommates from Elizabeth Hall were announced as champions of The Ultimate Roommate Competition. The competition took place on Mar. 15, 2019 at the O’Malley-McAllister Auditorium.

This event was one of the many ‘pillar programs’ that Benedictine puts on.

“Each semester an RA is expected to put on two ‘pillar programs’,” said Lexi Ricke, sophomore and an RA in Elizabeth Hall.

Ricke had help from many other RAs from a variety of different dorms.

“We wanted to get roommates from all over campus, men and women in every class,” Ricke said. “I thought that if nothing else, it would be a really cool way for roommates to maybe start getting to know one another better to see if they would be cut out for the competition, even if they were not participating.”

Winners of the Competition were Kelsea Runge and Molly Chevalier, both juniors on the Softball team.

“Molly and I decided to enter the competition because we’re a bit notorious for being a mess, but in a fun way,” Runge said. “This is our third year of living together, so we thought we had a legitimate shot at winning as well.”

Runge and Chevalier have known each other since high school, but they grew even closer when they both committed to play softball at Benedictine.

“Winning [the competition] serves to prove that Molly and I probably know each other a little too well after three years together,” Runge said.

Runge and Chevalier each received a grand prize of a $25 gift card and an assortment of candy.

“The competition was fun and I hope to see it grow in the future. The RA team did a great job with it,” Runge said.