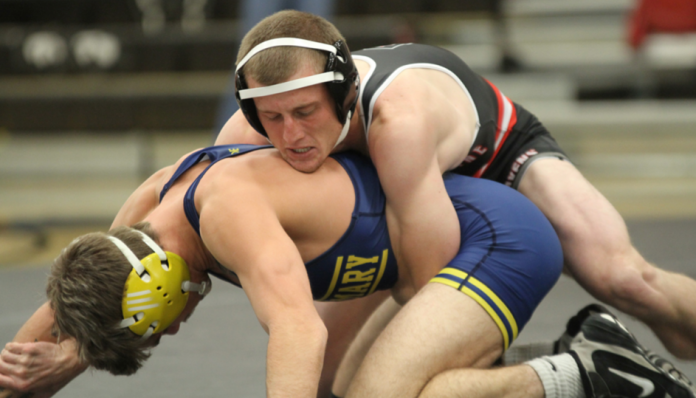 The Raven’s wrestling team recently wrapped up their season, with a lot of new faces on the mat, finishing 7th overall in the conference Championship. They also sent sending two wrestlers to the National Tournament in Des Moines, Iowa.

Their head coach, Marcus Cobbs, talked about his second season as Head coach as a growing season for the team and a lot of the wrestlers and their personal growth.

“It was a good season, saw a lot of growth,” Cobbs said. “Definitely a rough season; we have a young team going against a bunch of seasoned teams.”

Cobbs said the biggest difference between his first and second year as coach is the growth he’s seen in the men through wrestling and their daily lives as college students.

Cobbs linked the struggles of the season to the fact that eight out of their ten starters were freshmen. On the positive side, the freshmen wrestlers received a lot of growth this year, and Cobbs has seen big potential in them in the coming seasons.

“They’re going to be fine wrestlers in the future,” Cobbs said. “They have the talents to make it farthest you can make it in this next season, which is the national podium at the national tournament.”

A freshman that has made big strides this year was Matthew Lucas, who Coach Cobbs thought set himself apart from the group of freshmen wrestlers.

“He beat two nationally ranked guys this season,” Cobbs said. “He could have qualified for the national tournament. He had some shoulder problems so he’s kind of tried to manage those; it just didn’t work out for him this season, so we’re looking for him to come back healthy.”

Even though it was tough season for him, Lucas has been grateful for the opportunity to wrestle against some of the best in the nation and be able to win matches on the mat.

“It was a rough season, I had some ups and downs,” Lucas said. “Being in the match with some of the best guys in the country, if I change a little thing here or there, I could be beating those guys eventually. It gives me a lot of hope.”

The Raven’s finished 7th out of 8th in the conference tournament back in mid-February and bring two wrestlers to the national tournament in Iowa. The Heart of America conference is one the toughest wrestling conferences, considering the fact there were four of the top 15 nationally ranked teams in conference.

Seniors Tyler Harris and Bo Pursel were that past their own competition in conference finals and advanced to nationals. Cobbs stated even though Harris had two previous knee surgeries and stomach surgery, he came back strong and still made it to nationals.

“Tyler Harris is someone that rose to the occasion, gave him his shot, and he took his best shot,” Cobbs said. “He’s an awesome wrestler to have in the room.”

Bo Pursel transferred in after a few years of being away from the sport, but through hard work, he was able to get himself in great position to compete in nationals.

“We knew we’d get him to the national tournament because he’s so talented,” Cobbs said. “He definitely can wrestle with the best.”

Going forward, Cobbs has high hopes for his team as they keep on recruiting and getting better on and off the mat.