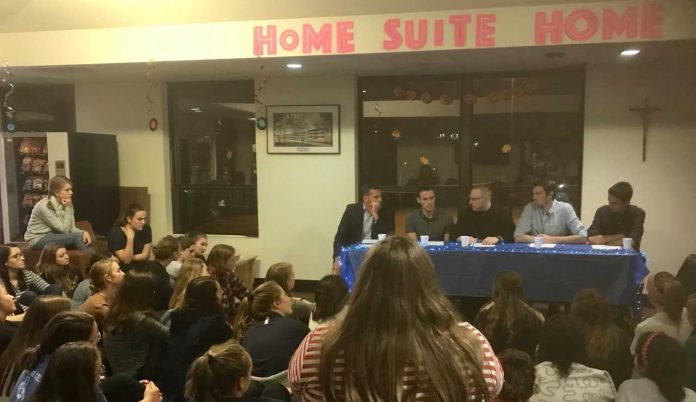 The Schroll Lounge was jam packed last Tuesday evening with some 150 energetic and eager Benedictine women. They were there to gain insight and firsthand wisdom from the minds and hearts of Benedictine men at McDonald Hall’s annual “Man Panel.”

There were five men on the panel representing the various relationship statuses–single, celibate, dating and married.

Among the panel members were Dr. Andrew Swafford, a theology professor, Michael Duchesne, the Resident Director of Turner Hall, Brother Leven Harton O.S.B, a monk from St. Benedict’s Abbey and John Kenney and Christian Spesia, who are both seniors at the school.

The attending women were encouraged to write down their questions for the men, and the men spent about two hours giving their two cents on the topics.

The discussion included questions regarding vocational discernment, dating, friendships with men and how to best love and respect men.

Question after question was asked in hopes of uncovering the age old question, “What in the world are men thinking?”

“I think women honestly do not understand men and their thought processes most of the time, but do not feel they can ask their guy friends or other men certain questions,” said Alex Kerschen, a Resident Assistant who helped host the event. “The man panel gives them a chance to ask these questions in an anonymous way and hear from quality men who truly want the best for these women.”

One piece of advice that struck Fiona Mulholland, sophomore, was the idea of clarity and sincerity in guy/girl relationships.

“A theme that came out in a lot of the answers was to be bold and to remember that it’s better to get rejected right away than stay in a gray area for several years or months,” Mulholland said. “It’s better to have clarity, and get that clarity sooner rather than later.”

Swafford drove this point home by saying that this gray zone should be avoided, for it can lead to disaster.

The men also discussed what they find attractive in a woman and look for in a potential partner.

“Confidence and holiness are the most attractive things that anyone could have,” Swafford said. “The charm, the confidence and the radical pursuit of holiness and virtue gets a guys attention.”

Kenney added that it is important for women to be mindful of what they want men to notice.

“Do you have that confidence and that holiness, that trait about you that you want guys to notice?” Kenney said. “Or do you just put your body on display? And that’s the first thing that a lot of guys are going to notice. It’s really what you want them to notice.”

By the end of the night, the women walked away with a greater sense of understanding about what goes on in the mind of a man. For many, it was not only the chance to hear from the guys, but to also come together in solidarity as women.

“It is both an opportunity for women to have questions answered and also to come together with other women and realize they are not alone in their struggles,” said Dani Fennessy, another Resident Assistant who helped with the event.

For Fennessy, one of her biggest takeaways was an insight Harton offered.

“[In all situations] The only adequate response is love,” Harton said.